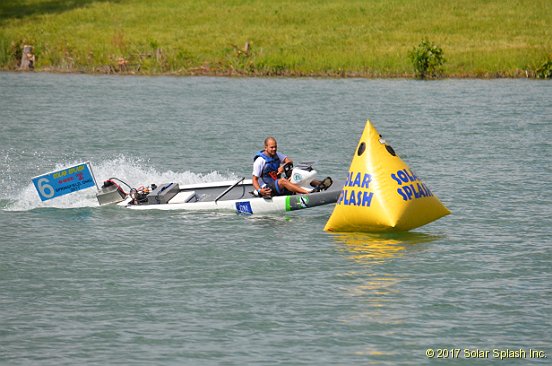 Each competitor is a student team that spends the previous year designing, constructing, and testing their solar boat. The boats, driven by a single skipper, vary greatly in appearance but must conform to size, power, and safety specifications. The boats compete in maneuverability and endurance events with solar panels in place on the crafts. Skippers must be able to safely steer the boats around set courses. The same boats then compete in sprints but may have a different configuration which often does not include onboard solar panels. Batteries, however, must be charged by solar panels, many of which the students construct themselves. Rules for the event, as well as results and photos from the past 24 years, can be found at www.solarsplash.com.

Cedarville University (Ohio) placed first in the overall results and received the George Ettenheim Memorial World Championship Trophy. The University of Puerto Rico at Mayaguez and Carnegie Mellon University followed in 2nd and 3rd places. Stevens Institute of Technology from New Jersey, a rookie team, finished 4th in the overall competition. Cedarville finished first in the slalom, endurance, and sprint events, and finished third in qualifying, contributing to their overall winning point total.

At the awards ceremony on Sunday afternoon, teams received competition awards for their boats’ performances as well as design awards as judged by teams of engineering judges. The Innovation award was given to the University of Puerto Rico at Mayaguez for its battery energy management system, which optimizes the use of battery energy in the endurance competition. 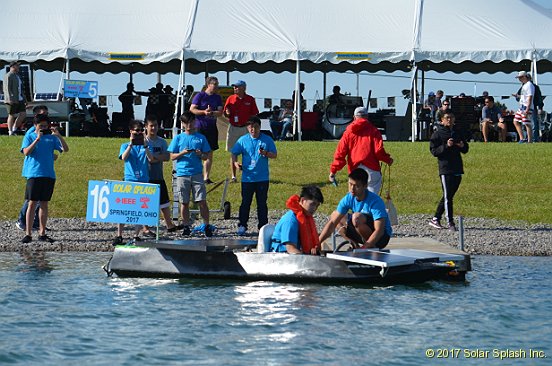 Cooperation and teamwork are important elements in the event so a sportsmanship award, a teamwork award, and a perseverance award are given. This year these awards were presented to Geneva College, Carnegie Mellon, and the University of Rochester, respectively.

Chris Fairchild, award winning power boat racer, brought his F1 class power boat and entertained the crowd and participants with a fast-paced boating exhibition during the lunch breaks on Friday and Saturday. In addition to blazing speed and unbelievably tight turns, he demonstrated his and the boat’s ability to perform “donuts” and “wheelies”!

The students, typically numbering three to a dozen or more on each team, spend the five days in the tented paddock area or near the water while their boats perform. Launching and removing the boats from the water are group efforts from each team. Pre-launch inspections include safety checks and verification of certified batteries and radios. While out of the water, teams must be ready for inspections by SOLAR SPLASH inspectors and by volunteer judges who question the teams regarding engineering decisions and designs.

A morning meeting is held each day so event officials, called Redshirts, can update the students on the day’s schedule and answer questions. Lunch is provided on site each day and the afternoon ice cream break is a favorite with the students and faculty advisors. An opening day welcome dinner is held each year on Wednesday, the first day of the event. 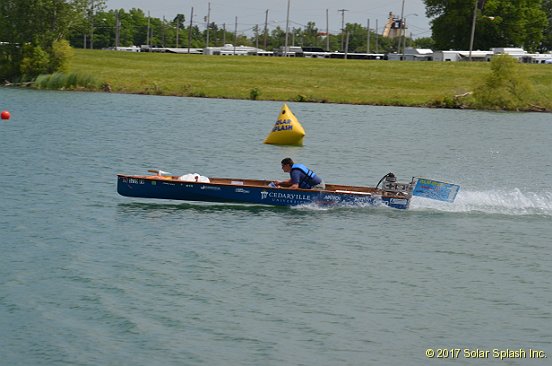 The Clark County Fairgrounds in Springfield, Ohio will be the site of the competition again in 2018. SOLAR SPLASH had the honor of being the first boating event held on the newly acquired lake adjacent to the grounds, and has been invited back as part of a continuing series of boating events which will feature power boat racing. Improvements to the lake site are planned and SOLAR SPLASH looks forward to returning in June of 2018. Weather for this year’s event was excellent with ample sunshine but cooler than normal temperatures. 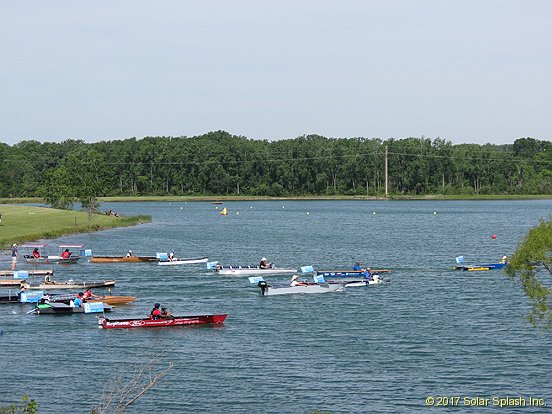 By partnering with engineering societies, corporate sponsors, and local volunteers, Solar Splash Inc. facilitates the event by managing competition rules, arranging for the competition site, and providing meals and extracurricular events for the students participating. SOLAR SPLASH “Redshirts” are the officials who manage the five-day event each year. Dr. Jeff Morehouse, University of South Carolina; David Luneau, University of Arkansas at Little Rock, and Dr. Roy Hogan of Sandia National Laboratories are the engineering officials of the event.