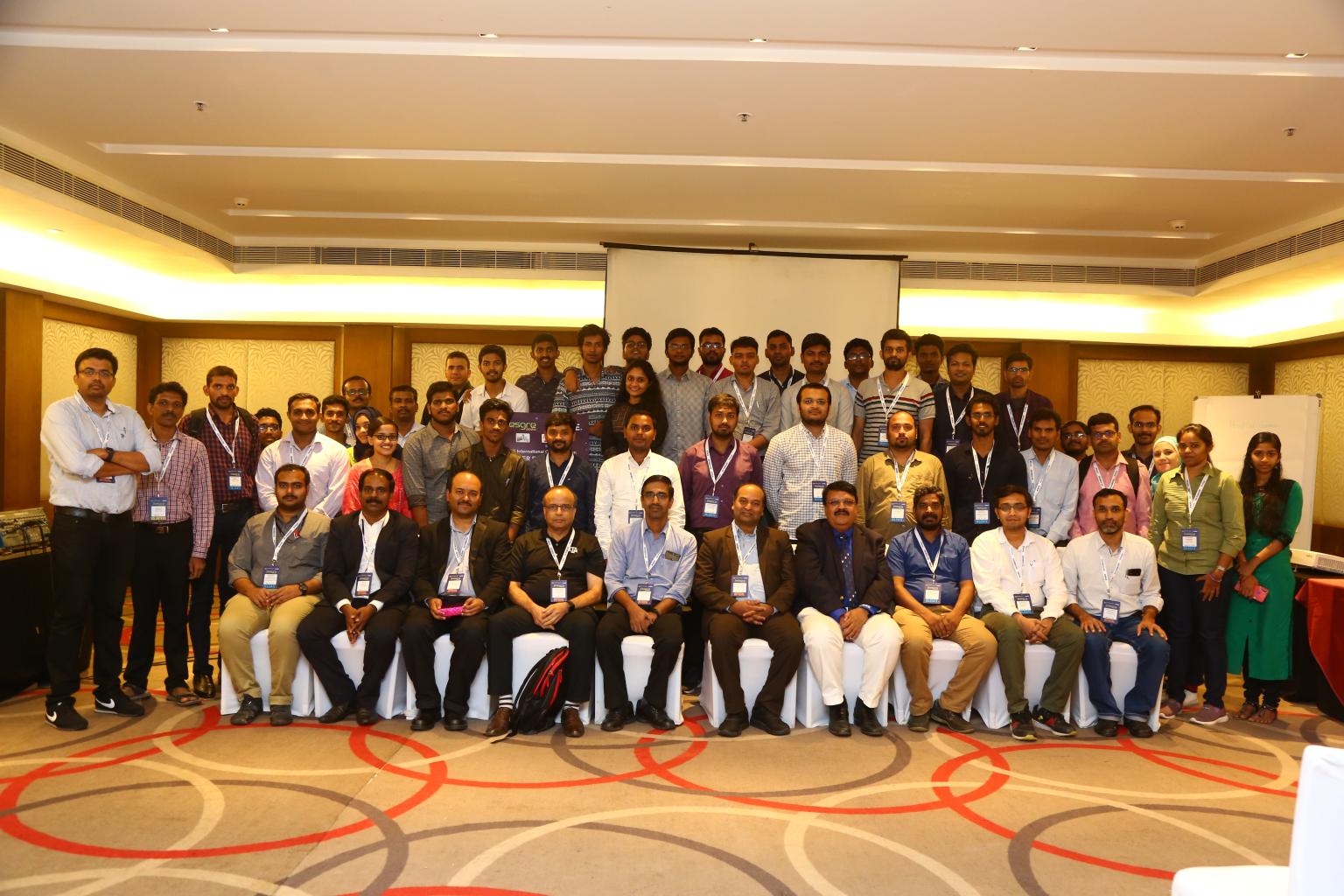 The 2019 edition of Applied Power Electronics Conference (APEC 2019), the leading conference for power electronics professionals, was held in Anaheim, USA in March. Students and Young Professionals receptions have become staple events at APEC. This year the event was held at Jazz Kitchen in Downtown Disney. The casual setting of Downtown Disney and the jazz music provided the perfect background for students and young professionals to enjoy the evening; and interact with each other and also society leaders, such as PELS President Prof. Frede Blaabjerg and IAS Past President Dr. Tomy Sebastian. One could say that the New Orleans-themed venue provided the 120 attendees an excellent preview of what APEC has in store for 2020, when the conference visits the festive city of New Orleans. The 4th Annual IEEE Southern Power Electronics Conference (SPEC 2018) was held at Nanyang Technological University (NTU), Singapore in December 2018. In collaboration with the conference committee, IEEE PELS Students and Young Professionals Committee sponsored the Social Dinner held on 11th December at ORTO, located in the northern part of Singapore. ORTO is the country’s first multi-recreational park, catering to all-day and night activities such as prawning and fishing. Over 130 participants attended the dinner and enjoyed the opportunity to network over delicious food and drinks under the cool, scenic and relaxing countryside ambience. SPEC 2018 General Chair Prof. Jason Lai gave a presentation and showed a short video to introduce participants to Singapore. SPEC 2019 General Chair Prof. José Antenor Pomilio presented on SPEC 2019 (to be held in December 2019 in Santos, Brazil).

The International Power Electronics Conference (IPEC) is one of the ECCE Asia series conferences. This conference has been sponsored by the Institute of Electrical Engineers of Japan (IEEJ) and co-sponsored by IEEE Power Electronics Society (IEEE PELS) and IEEE Industry Applications Society (IEEE IAS). The eighth IPEC (IPEC-Niigata 2018) was held from May 20 to 24, 2018 in Niigata, Japan. As it is the hometown of Prof. Isao Takahashi, who is one of the biggest memorable names in power electronics, the year’s IPEC – ECCE Asia became more unforgettable. As a tradition, the IEEE PELS Young Professionals (YP) Committee promoted the YP Event held at IPEC-Niigata, where the IPEC Steering Committee, IEEE IAS, and the Ph.D. candidates of Power Electronics in Japan (PPEJ) generously supported the event (Fig. 1). It was a very successful gathering, and we called it the Students and Young Engineers Meeting. This event had two main parts in the daytime and in the evening. The daytime event was filled with opening remarks from the representatives from PPEJ and PELS YP, where it was interesting that a survey about the Ph.D. students’ life in labs was presented and they worked a lot (over 12 hours per day) in labs. Then, a poster session was organized to show the labs across the global universities. This session was closed with speeches from distinguished professors. The evening event was a social networking activity with Japanese drinks and foods served. It was held in a cozy and pleasant traditional Japanese pub – IZAKAYA. In all, the Students and Young Engineers Meeting was a great success. We looking forward to seeing you in the upcoming YP events at ECCE Europe and ECCE North America.. 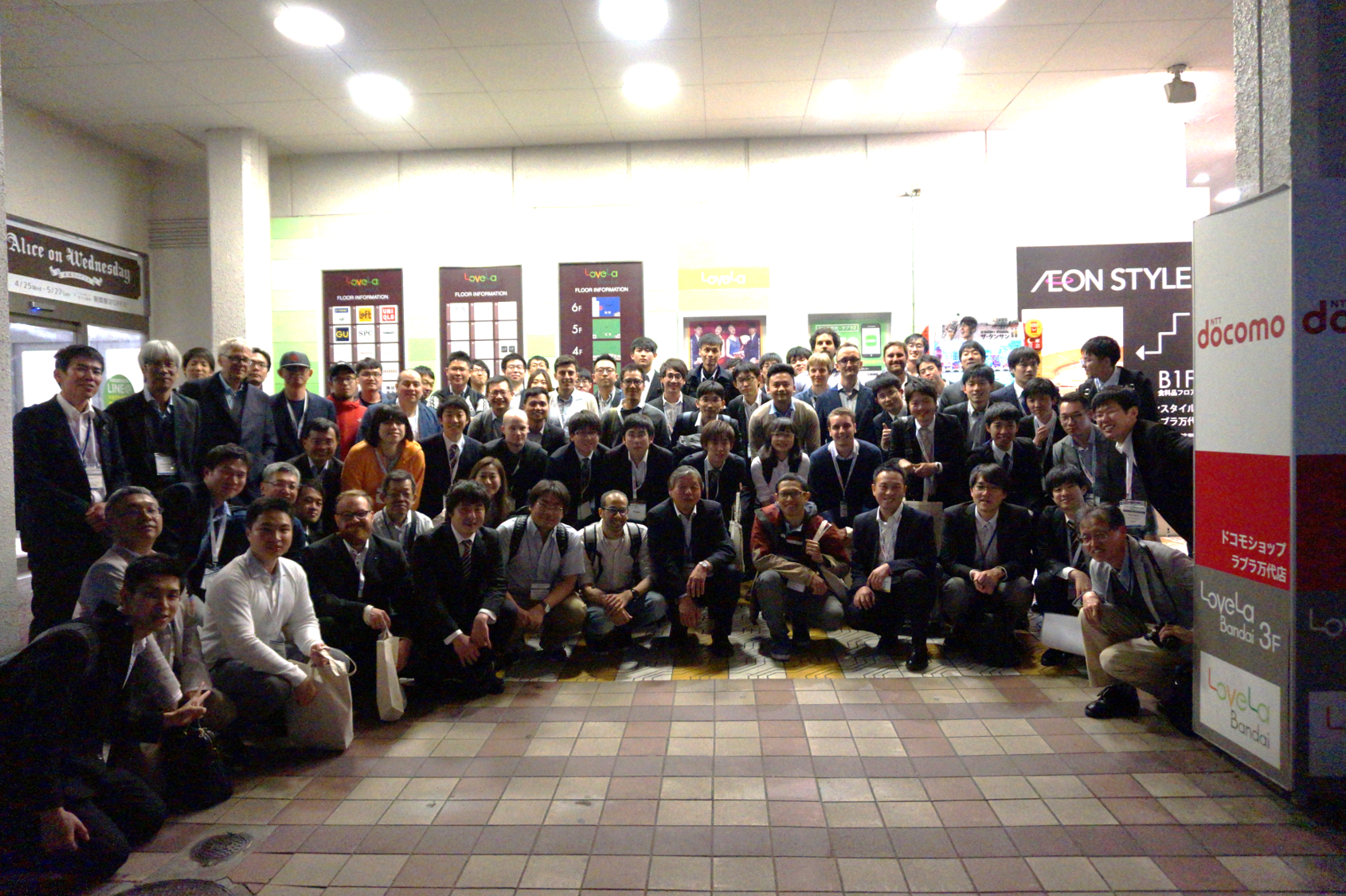 Power Electronics Society (PELS) and IEEE Industry Application Society (IAS) sponsored this opportunity to learn from the life journey of the biggest leaders at APEC along with an evening well spent talking to people from across the globe. The students' and YPs' reception at APEC-2018 was held on March 6, Tuesday 7:00 pm to 10:00 pm at: Rio Rio Cantina, Estrella Room (3rd floor). It was an event full of fun and interaction over some delicious food. The event was attened by over 100 members of the power electronics world, along the side of the beautiful RiverWalk at San Antonio. 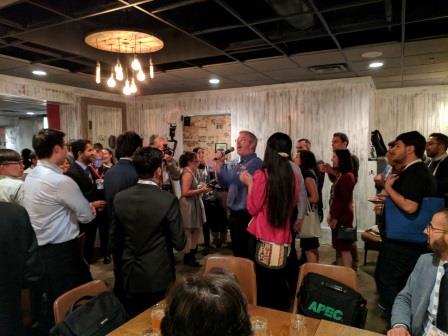 IEEE Industry Application Society  (IAS), and Power Electronics Society (PELS), provided an opportunity to learn from the life journey of the biggest leaders at ECCE along with an evening well spent talking to people from across the globe through its Students' and Young Professionals' reception. More than 220 power electronics professionals, including students, enjoyed networking over delicious snacks and drinks at the Bauer Farm Kitchen near the Duke Convention Center in CIncinnati. The current Presidents of both IAS and PELS societies gave brief talks. As it was IEEE Day, there was a cake cutting celebration too. Overall, it was an event worth cherishing. 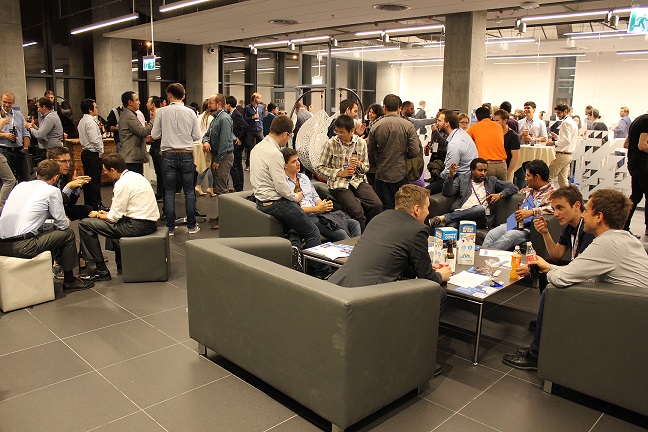 The 19th edition of the European Conference on Power Electronics and Applications (EPE’17 – ECCE Europe) went to the beautiful and historical Polish capital – Warsaw, which attracted many professionals, students, and industrials. It was held at ‘Pałac Kultury i Nauki w Warszawie’ (Palace of Culture and Science, Warsaw), September 11-14, 2017. At the EPE’17 – ECCE Europe, IEEE PELS YP Committee organized a special event for students and young professionals as the tradition. This year’s reception was a big success thanks to the great collaboration with IEEE Young Professionals Affinity Group from Poland Section. It was beyond a simple reception, but an energetic, inspiring, and social YP Meet-up. After the speeches by representatives, it was an energetic networking event, where the attendees met many new people. The successfully exchanged information, busily networked, and were keen to know each other over complimentary Polish food and drink. The two-hour networking enables the participants making international connections and friendships that will help them as they pursue their careers. There were more than 180 attendees at the Meet-up.

IEEE PELS and Women In Engineering (WIE) co-sponsored a YP Reception at ECCE ASIA 2017, which was held at Kaohsiung, Taiwan on June 03, 2017. Similar YP receptions are held at many major PELS conferences and have become an annual event in the ECCE Asia conferences series. This year’s reception brought together and showcased both YP and WIE PELS members from various parts of the world. The event kicked off with YP members from power electronics labs around the globe sharing their experiences in their research labs. Presentations were given by Prof. Cheng-Yu Tang from Feng-Chia University, Taiwan; Tsung-Hsi Wu, a student from National Sun Yat-Sen University, Taiwan; Mina Kim, a student from Ulsan National Institute of Science and Technology, South Korea; Tatsuki Osato, a student from Chiba University, Japan; and Wenbo Wang, a student from University of Bristol, United Kingdom. In their presentations, they showed not only the everyday life of the lab in their country, but also their passion for their research and why they chose power electronics as their major.. 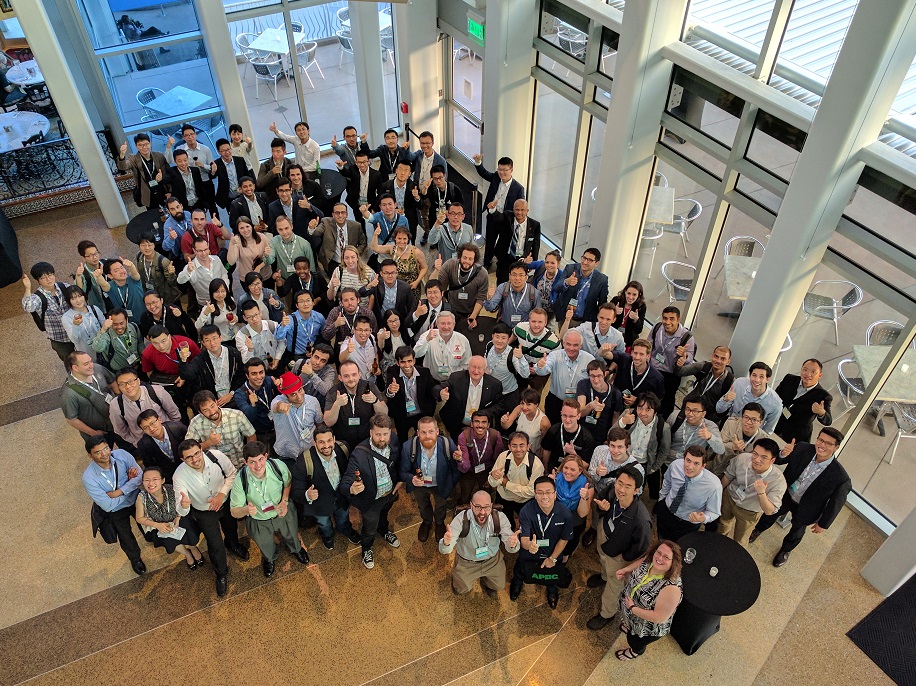 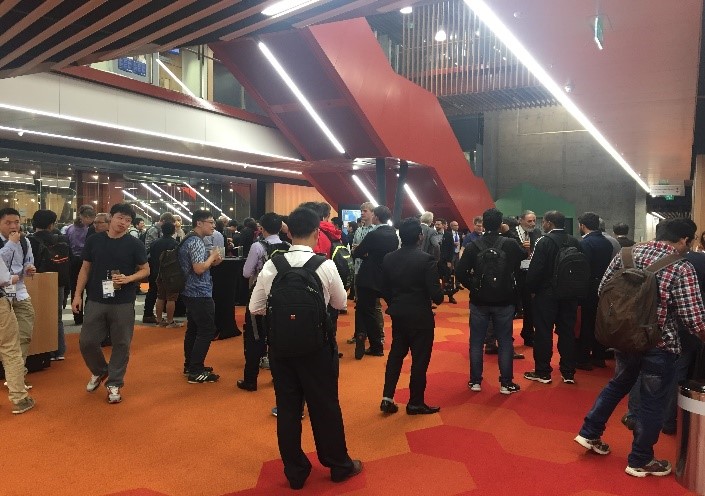 As a prestigious conference for IEEE Power Electronics Society (PELS), the 2nd Annual IEEE Southern Power Electronics Conference (SPEC 2016) was held in Auckland, New Zealand. In collaboration with the conference committee, IEEE PELS Students and Young Professionals Committee invited students and young peers in power electronics to a Reception on December 5, 2016, at the University of Auckland. A “PELS Members’ Stories” session was held at the beginning, where 3 distinguished guests (Prof. Udaya K. Madawala, Prof. Braham Ferreira, and Prof. Frede Blaabjerg were invited to share their stories as a Member of IEEE PELS, which were very enlightening to the participants. After this, a reception with complimentary food and drinks was held for the participants to network, which was enjoyed by over 80 attendees! 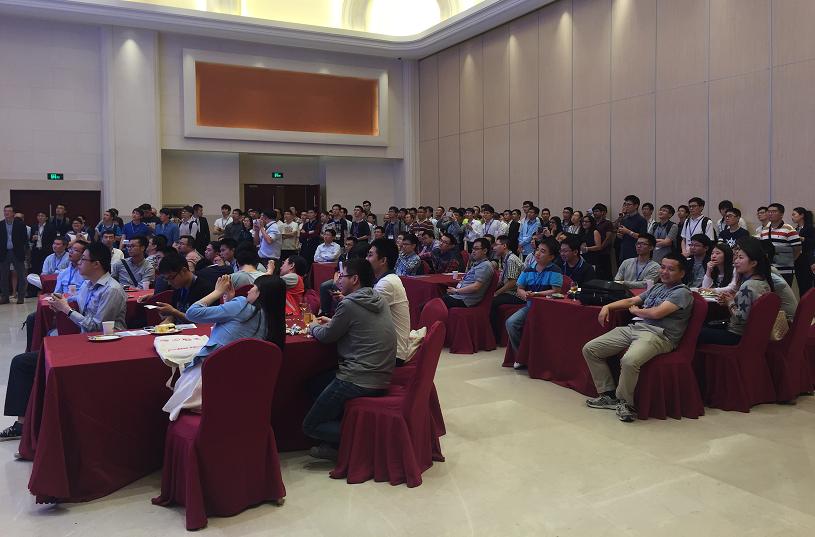 IEEE PELS organized a Students' and Young Professionals' Reception at IPEMC 2016, which was held at Platinum Hanjue Hotel in Hefei, China on May 23, 2016.  There was a huge turn out of about 145 attendees, who enjoyed networking opportunity with peers and distinguished guests (Dr. Liuchen Chang, Dr. Braham Ferreira, Dr. Mark Dehong Xu, and Dr. Katherine Kim), over complementary cakes and drinks. There was also a cherishing talk on 'Women in Engineering'. This event enhanced the experience of young participants at IPEMC into a relaxing environment! 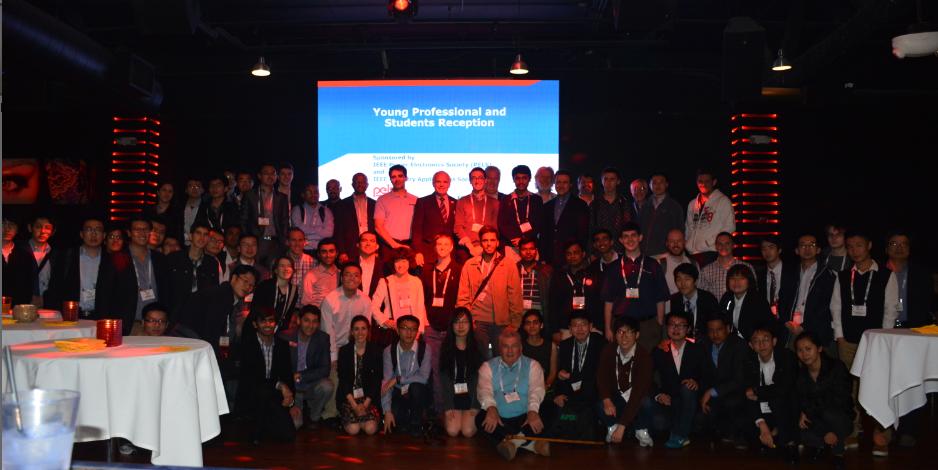 IEEE PELS and IAS co-sponsored a Students and Young Professionals' Reception at APEC 2016, which was held at Café Sevilla in Long Beach on March 22, 2016.  Over complementary drinks and appetizers, more than 110 attendees enjoyed the panel discussion "Research for a cause - Thinking Why before What" and the networking opportunity with distinguished guests. This event also extended the young participants' experience of APEC into a relaxing environment by inviting the APEC organizers and plenary speakers. 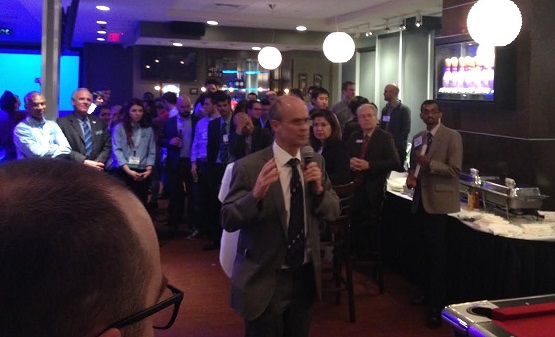 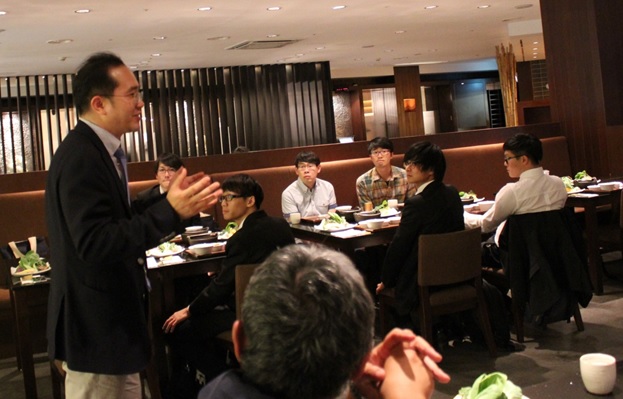 The event kicked off with a greeting from Prof. Braham Ferreira (Delft University of Technology), current PELS President, and Prof. Seung-Ki Sul (Seoul National University), current KIPE President, emphasizing the importance of active young members to the future of the power electronics field and community. During the Young Researcher Activity, students from various countries presented posters about their school, research lab, lab culture, research projects, and general experiences. Students represented schools from Korea, Japan, China, Taiwan, U.S., and Denmark. Over 70 attendees participated in the activity and talked with students from the represented schools while networking and enjoying a reception. 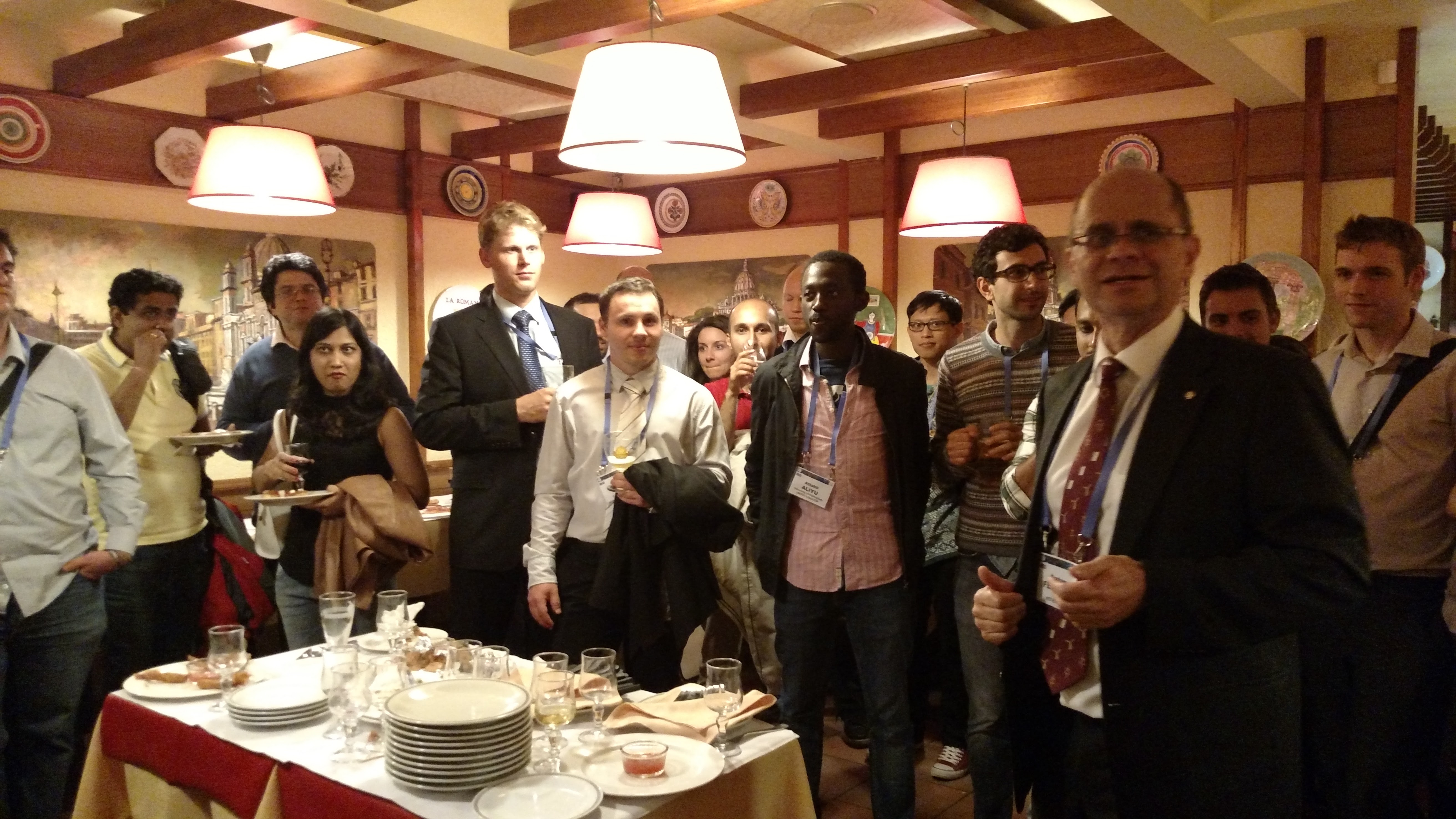 The EPE Students and Young Professionals Reception was held at La Romana (Rue de Vermont 37, 1202 Genève, Switzerland) on Tuesday, 8th September at 20h30 (after the EPE Welcome Reception). About 90 Students/YPs completed signed-in officially. There were penty of opportunities for networking. Students/YPs from different affiliations were meeting for the first time and having nice discussions.

Towards the middle of the event, Dr. Braham Ferreira, Dr. Leo Lorenz, and Dr. Dushan Boroyevich, each gave a short but sweet speech to the YPs. Throughout the event, they also networked with the YPs. Dr. Fred Lee, Dr. Rik De Doncker, and Mike Kelly also attended. The food and drinks were great as well. Lots of homemade Italian food and plenty of wine!! 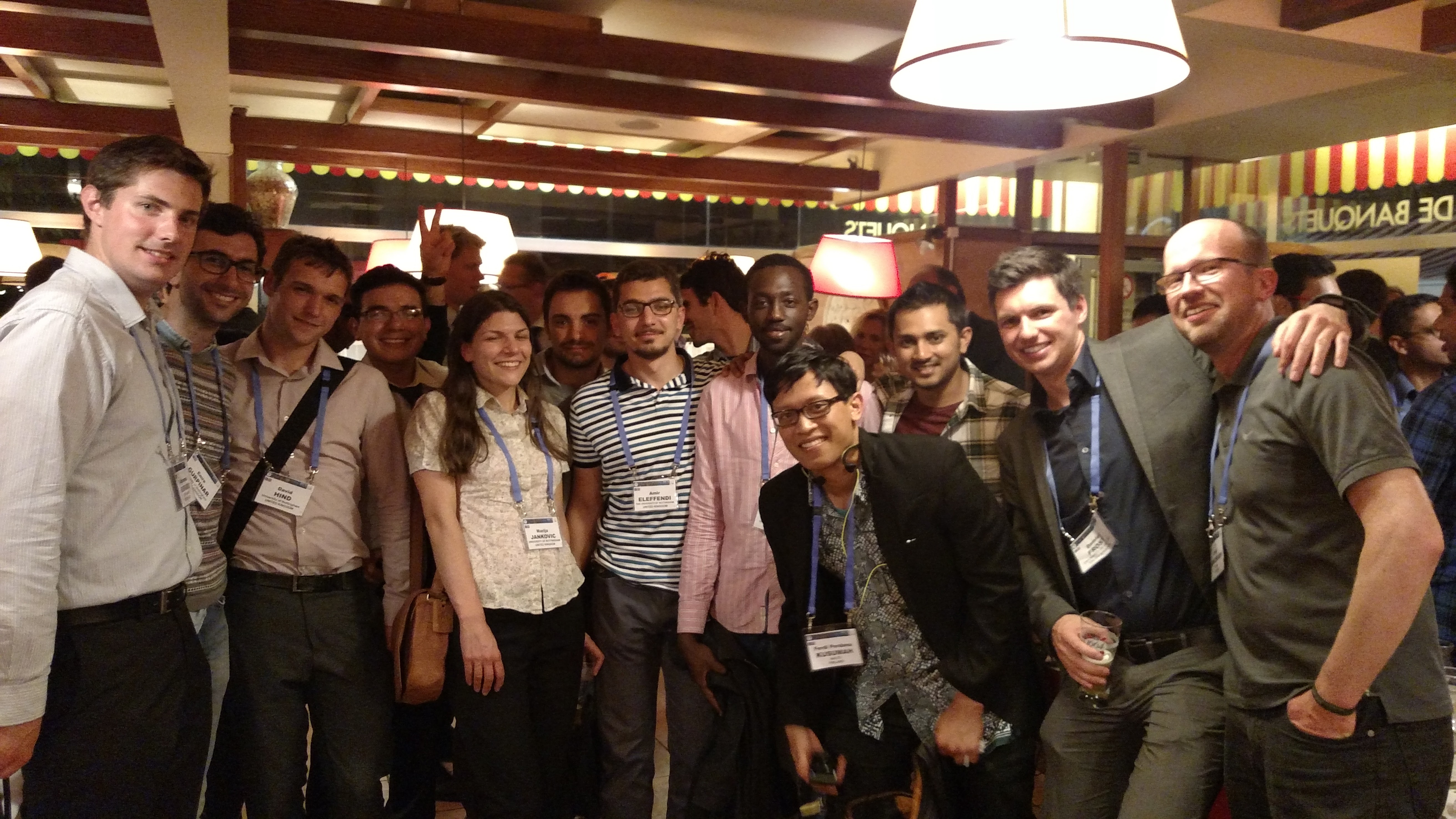